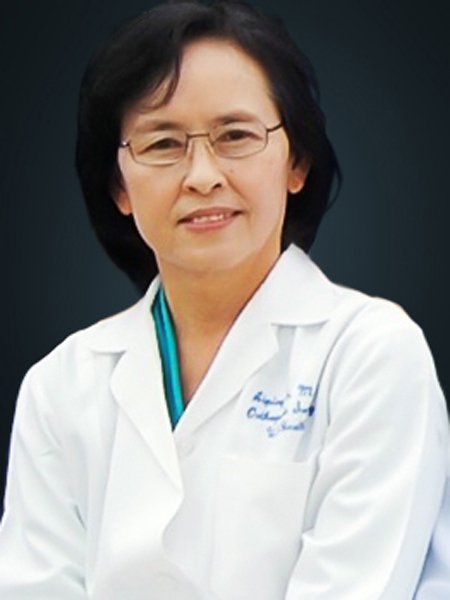 Dr. Aiping Lu, MD is Principal Investigator & Program Director of Muscle Repair & Stem Cell Biology at the Linda & Mitch Hart Center for Regenerative and Personalized Medicine (CRPM). Prior to joining CRSM/SPRI, Dr. Lu was an assistant professor in the Department of Orthopaedic Surgery at the University of Texas Health Science Center in Houston for 4 years. Currently, Dr. Lu works closely with Dr. Johnny Huard and is involved in all of the NIH-funded projects at CRPM. Dr. Lu’s main areas of research are muscle stem cell biology and applications for muscle repair and disorders; characterization and transplantation of muscle stem cells for alleviating muscular degeneration associated with Duchenne muscular dystrophy (DMD) and the phenotypic changes associated with natural aging and progeria.

Dr. Lu received her MD degree in China, and she had 16 years of clinical experience on renal disease before she came to the United States. Dr. Lu’s research over the past 20 years has been focused on stem cell therapy for skeletal muscle disorders, injury and aging. Dr. Lu has extensive knowledge in the areas of stem cell therapy, tissue engineering and regenerative medicine applications based on the use of muscle-derived stem cells (MDSCs). The MDSCs isolated from humans are currently undergoing clinical trials for the treatment of urinary stress incontinence and myocardial infarction. As of this date, more than 300 women in Canada and the U.S. have volunteered for this stem cell therapy. Dr. Lu has published more than 40 papers including first, co-authored and corresponding authored peer-reviewed articles. Dr. Lu’s team has had over 100 abstracts accepted for presentation at national and international conferences. Dr. Lu has been involved in many NIH-funded projects, mainly focused on muscle stem cell isolation and characterization, alleviation of muscle weakness in DMD, cardiac and skeletal muscle injury repair, regeneration, and fibrosis prevention as well as the use of adult stem cells as a source for paracrine factors to alleviate the phenotypic changes associated with natural and accelerated aging. Dr. Lu was awarded an NIH R21 grant entitled, “Effects of Circulating Factors and Progenitors on Wound Healing during Pregnancy” (NIH R21 AR073509-01, 06/01/18 – 05/31/20) as multi-PI; she has led this project. Additionally, Dr. Lu has trained many medical students, graduate students, postdocs and clinical fellows for 20 years in the United States.

Project #1: Study of parabiosis & pregnancy for improving the histopathology in dystrophic mice and muscle repair.
Duchenne muscular dystrophy (DMD) is a progressive muscle disease, characterized by mutations in the X-linked dystrophin, that has several therapeutic options but no curative treatment. An alternative approach to utilize progenitor cells and circulatory factors and to improve the dystrophic muscle pathology and microenvironment is through parabiotic pairing, where mice are surgically sutured to create a joint circulatory system. Our results showed heterogenetic parabiosis between healthy and dystrophic mice improves the histopathology in muscular dystrophy. Pregnancy represents a unique biological model of a naturally shared circulatory system between developing and mature organisms. We demonstrated that enhancement of myogenic potential of muscle progenitor cells and muscle healing during pregnancy.

Project #2: Accelerated Muscular Skeletal Tissue Regenerative Response in MRL/MpJ Mice.
It has been reported that MRL/MpJ mice, also known as super-healer mice, can greatly repair a variety of musculoskeletal tissue injuries throughout their lifespan, including ear wounds, skin wounds, nerve injuries, bone lesions and even articular cartilage lesion. Our research results showed that muscle, bone and cartilage healing upon injury were accelerated in MRL/MpJ mice when compared to WT/B6 age-matched control mice. The higher levels of circulating antioxidants play important roles in accelerating tissue-healing capacity. In addition, up-regulation of genes involved in repair processes, such as angiogenesis, DNA repair and replication, protein synthesis, glycolysis, and cell adhesion have been reported in the MRL/MpJ mice.

Project #3: To analyze the cell non-autonomous effects induced by aging and stress on MDSPCs using tissue-specific inactivation of ERCC1 (NIH, PO1).
There are multiple lines of evidence that support the hypothesis that aging is caused, in part, by the loss of functional stem cells. We have already demonstrated that muscle-derived stem/progenitor cells (MDSPCs) isolated from the skeletal muscle of naturally aged and progeroid ERCC-deficient mice have a reduced ability to proliferate and differentiate, and an impaired regenerative capacity compared to MDSPCs isolated from young wild type (WT) mice. Although this dysfunction is consistent with the concept that the accumulation of damage directly to the stem/progenitor cells (cell autonomous effect) contributes to the loss of tissue regeneration and homeostasis associated with aging, a potential defect in the stem cell niche or circulating factors could also affect MDSPC function in a non-autonomous manner. It remains unclear if aging-related loss of adult stem cell function is primarily driven by cell autonomous (e.g., increased DNA damage) and/or non-autonomous mechanisms (aged microenvironment or circulating factors). In the current study we utilized a mouse model that had a tissue-specific deletion of the ERCC gene and investigated whether aging affects the stem cell niche, impacting stem cell function via a nonautonomous mechanism.

Project#4: The role of muscle progenitor cell exhaustion in the rapid disease progression observed in mdx/utrophin-/- Mice (NIH, RO1).
Duchenne muscular dystrophy (DMD) patients lack dystrophin from birth; however, muscle weakness only becomes apparent at 3-5 years of age, which happens to coincide with the depletion of the muscle progenitor cell (MPC) pools. Indeed, MPCs isolated from older DMD patients demonstrate impairments in myogenic potential. To investigate whether the progression of muscular dystrophy is a consequence of the decline in functional MPCs, we investigated two animal models of DMD: 1) dystrophin deficient mdx mice, the most utilized model of DMD, which has a relatively mild dystrophic phenotype, and 2) dystrophin/utrophin double Knock-Out (dKO) mice, which display a similar histopathological phenotype to DMD patients. In contrast to age-matched mdx mice, we observed that both the number and regeneration potential of dKO MPCs rapidly declines during disease progression. Our results demonstrate that the rapid disease progression in the dKO model is associated, at least in part, with MPC depletion. Therefore, alleviating MPC depletion could represent an approach to delay the onset of the histopathologies associated with DMD patients. Related publications:

This grant will potentially reveal the cellular and molecular mechanism linking muscle weakness, MPCs depletion/FAPs activation with muscle vascularity after ACL injury and could consequently lead to the development of more effective novel therapeutic approaches and rehabilitation strategies for delaying/reversing muscle weakness after ACL injury.

Our overarching hypothesis is that circulating factors and progenitor cells from the fetus are responsible, at least in part, for improved wound healing during pregnancy.

Our overarching hypothesis is that a novel genome engineering system can be used to antagonize TGF-β1-mediated fibrosis and further improve the beneficial effects of MDSCs on muscle healing after injury.

The goal of this proposal is to determine the nature of the skeletal system defects in a mouse model of
DMD and determine if the bone abnormalities are due to stem cell pool defects or via other systemic factors.

In this grant we will further characterize the defect(s) in MDSCs, and mesenchymal stem cells (MSCs) isolated from ERCC1-XPF-deficient mice and naturally aged mice and elucidate their mechanisms of action.