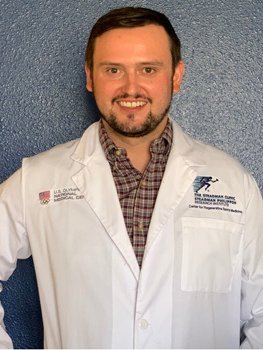 Matthieu Huard joined the Steadman Philippon Research Institute in 2019 as a contractor for his company MMCJ Biomedical Research LLC tasked with building a new laboratory in Fort Collins. He accomplished his B.A in Forensic Science from Edinboro University of Pennsylvania in spring of 2016. While working for SPRI he maintained  the laboratory and ensured a safe and efficient work environment for himself and surrounding team. Matt’s primary focus was interacting with vendors/companies ensuring competitive prices for equipment and helping with routine laboratory support. In June 2020, Matt received an offer from SPRI to join the team officially as a research technician/lab operator tasked with handling the day to day wellbeing of the lab (maintaining, purchasing, budgeting)  while involving himself in scientific projects with fellow respected principle investigators from the Vail and Fort Collins laboratories. In addition, Matt plays an important role as a liaison between Colorado State University where the pre-clinical animal research takes place and is heavily involved in the genotyping of mice which determines the DNA genetic make-up of particular mouse colonies.

Post-graduating from college in 2016, Matt moved from Pittsburgh Pennsylvania to Houston Texas to pursue working for the Harris County Institute of Forensic Sciences, working primarily with the Anthropology team where his love for science extensively grew. In 2019 he decided to make a change from South to West and landed in the Colorado Rocky Mountains where he found himself incredibly impressed with the scenery, lifestyle, and culture. Since joining the Center for Regenerative Sports Medicine Department SPRI team officially in 2020, Matt is dedicated/motivated by animal research projects and collaborating with various research laboratories and has grown increasingly passionate in molecular biology and is the proud son of Dr. Johnny Huard.

When Matt isn’t in the laboratory you can find him exploring various breweries throughout  Fort Collins, biking in the mountains, skiing in fresh powder, watching the Colorado Avalanche win, fishing in various locations throughout Colorado, and enjoying the company of his family.