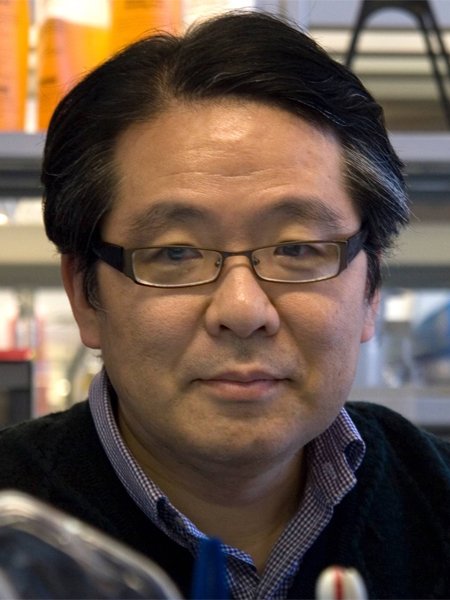 Naoki graduated from the University of Tokyo (Faculty of Science), Tokyo, Japan, with a major in biophysics and biochemistry. He then joined the Department of Chemistry in the Institute of Medical Science, the University of Tokyo (IMSUT), led by Dr. Yoshito Kaziro (a foreign member of NAS from the United States) as a graduate student. However, as his mentor Dr. Ken-ichi Arai who returned to IMSUT from Stanford University quickly moved back to California (DNAX Research Institute, founded by Drs. Arthur Kornberg, Paul Berg, and Charles Yanofsky at Stanford University), Naoki had an opportunity to complete his PhD thesis on “Molecular genetics of the G-protein coupled receptor signal transduction in yeast” through help from Dr. Arthur Kornberg at Stanford, and continue work as a postdoc under Dr. Arai in DNAX. Naoki was impressed with the scientifically open and stimulating atmosphere that DNAX provided, and the power of such a pseudo-academic biotech company to advance science. This experience inspired him to do science outside of Japan, even in an industrial setting. Although he was appointed as Assistant Professor (called Joshu) in IMSUT in Tokyo, he decided to move back to California as Principal Investigator (PI) at Amgen, Inc., and participated in various basic/discovery research in the area of developmental hematopoiesis, using mouse embryonic stem cells (ESCs), as well as in drug discovery research in the area of bone and cartilage diseases. He later took a PI position in Australia for human ESC works as a step toward returning to the academic world.

Naoki is a pluripotent stem cell (PSC) specialist. As PI at Peter MacCallum Cancer Institute and Australian Stem Cell Centre (ASCC) in Melbourne, Australia, and then as Associate Professor in IMM UTHealth in Houston, his research has been focusing on basic as well as translational aspects of human embryonic hemogenesis and skeletogenesis using human PSCs—such as ESCs and induced pluripotent stem cells (iPSCs)—as a model system; he established an unbroken track record. PSCs tend to generate embryonic/fetal cell types. During our fetal life, many important functional cells are newly generated. For example, our joint cartilage is newly developed during limb development. Naoki believes that rejuvenation is one of the keys for success in regenerative medicine for some adult tissues such as intrajoint cartilage and ligament. Therefore, he considers that basic and translational studies of human iPSC-derived tissue-specific fetal progenitor cells (e.g., joint progenitor cells) are important, since the iPSC technology is thus far the only reliable cellular rejuvenation technology to obtain fetal cells from elderly patients.

Supported by the NIH and other external funding sources, Naoki will not only expand the research on the human PSC-derived joint cartilage-forming cells, but also conduct new cartilage research programs, which will complement SPRI’s clinical expertise and current research portfolio. He is also interested in mentoring young researchers and visiting fellows at SPRI.