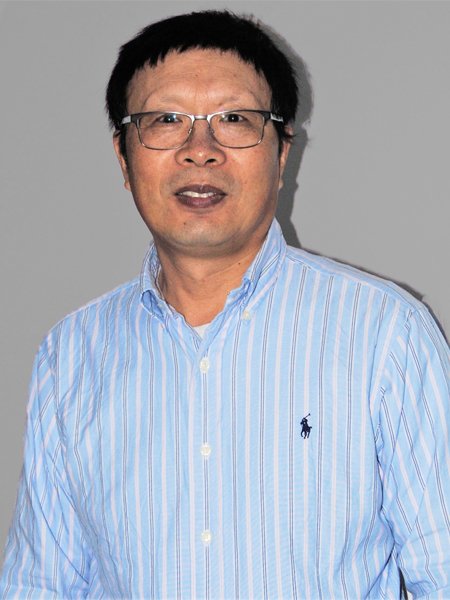 Principal Investigator and Program Director of Genetic and Cellular Engineering

Ping Guo, PhD is the Principal Investigator & Program Director of Genetic and Cellular Engineering at the Linda & Mitch Hart Center for Regenerative and Personalized Medicine (CRPM). Prior to joining CRPM/SPRI, Dr. Guo was an assistant professor in the Department of Orthopaedic Surgery at the University of Texas Health Science Center in Houston for 4 years. Dr. Guo was trained as a post-doctoral fellow in a cancer research laboratory at the University of Pittsburgh Cancer Institute for 5 years. After his postdoc training, Dr. Guo worked as a research assistant professor in the Department of Surgery at Children’s Hospital of Pittsburgh at the University of Pittsburgh. Dr. Guo’s studies focus on the research of pancreatic development and diabetes using transgenic mice, CRISPR-Cas9 gene editing, RNA-seq and proteomic analysis techniques.

Dr. Guo received his PhD degree in China, and he focused on biomedical and translational research for more than 20 years. With his rich experience as a genetic and cellular engineer, Dr. Guo has developed techniques for the creation of lentiviral and adeno-associated viral vectors for cell targeting, gene modification and tissue engineering use in experimental systems. Dr. Guo has published more than fifty papers including first, co-authored and corresponding authored peer-reviewed articles. After joining CRPM at SPRI, Dr. Guo’s efforts more recently have focused on an NIH (NIH R21 AR072870) sponsored study that evaluates a novel genome engineering system, CRISPR-Cas9 gene editing system, to integrate genes to antagonize TGF-β1 mediated fibrosis and further improve muscle healing after injury. As a biomedical scientist, Dr. Guo has trained many medical students, graduate students, postdocs and clinical fellows for 20 years in the United States. Dr. Guo has broad interests in gene and cell therapy for inherited genetic and chronic diseases.

Duchenne muscular dystrophy (DMD) patients, due to the lack of dystrophin and associated glycoprotein complex expression from the sarcolemmal membrane, rendered muscle fibers fragile and susceptible to damage during contraction which resulting in muscle weakness. It is critical to find a successful therapeutic approach that will improve the histopathology of muscles of DMD patients and restore skeletal muscle function. Many proinflammatory genes in DMD patients are upregulated within muscles, beginning shortly after birth. This early inflammatory response is followed in later stages by a failure of muscle regeneration with associated muscle fibrosis in DMD patients. TIPE2 (tumor necrosis factor-α-induced-protein 8-like 2), identified as a negative regulator of immune response, has been found to be expressed in various types of immune cells including macrophages. However, whether and how TIPE2 plays a role in the DMD-related inflammation remains unknown. In this study, we found the basal expression levels of TIPE2 in skeletal muscle from mdx mice is significantly lower than wild type mice. To investigate the potential beneficial effect of TIPE2 in muscular dystrophy, we performed intramuscular injection of AAV9 carrying the TIPE2 gene in mdx mice. Our results indicate that the restoration of TIPE2 ameliorates muscular dystrophy phenotype through a reduction in inflammation and fibrosis. Our study indicates that a reduction of TIPE2 expression is observed in dystrophic skeletal muscle, when compared to WT and more importantly that TIPE2 gene delivery may provide as a novel anti-inflammatory therapy to alleviate the muscle weakness in DMD patients.

A better understanding of how to form new β-cells, and from where they might arise is of the utmost importance toward our goal of devising a strategy for β-cell replacement therapy for diabetics. β-cell replication appears to be the predominant mechanism underlying the generation of new β-cells in young healthy animals, and perhaps in humans. However, neogenesis of β-cells from non-β-cell sources may also play an important role, particularly in diabetics and in the elderly, where the capacity for β-cell replication appears to be diminished. We feel that the pancreatic ducts have emerged as the most likely candidate for a non-β-cell source of new β-cells. An anatomical "association" between the pancreatic ducts and the islets has been well-described for over 100 years, with most islets displaying some sort of contact with, or at least proximity to ducts. Here, however, in a genetically altered mouse model in which β-cells do not proliferate after partial pancreatectomy, we describe a fairly dramatic sprouting of new ductal structures from existing large ducts after partial pancreatectomy. These sprouting ducts grow into and ramify within islets. Preliminary experiments strongly suggest that these intra-islet duct cells convert into islet cells. Interestingly, this ductal growth is largely suppressed if these same mice are bred into a background where proliferation of the islet cells after a pancreatectomy is restored. A better understanding of these intra-islet ductal structures and the insulin+ cells they give rise to will have important implications for our ability to generate new β-cells in the future, both in vitro and in vivo.

The goal of our research is to improve therapy for patients with invasive gliomas through a better understanding of the mechanisms by which these tumors invade normal brain tissues. Invasion of glioma cells into adjacent brain structures occurs through the activation of multigenic programs including matrix metalloproteases (MMPs) that degrade extracellular matrix (ECM) at tumor invasive fronts to overcome the ECM barrier. Recently, we have demonstrated that angiopoietin-2 (Ang2), a known angiogenic factor, induces glioma invasion through the activation of MMP-2 and membrane type-1 (MT1)-MMP. We analyzed a large number of primary human glioma biopsies and found that Ang2, MMP-2 and MT1-MMP are co-overexpressed in the invasive areas, but not in the central regions, of these tumors. Consonantly, high expression of Ang2, MMP-2 and MT1-MMP are also evident in the actively invading regions of human U87MG Ang2-expressing glioma xenografts. Stable expression of Ang2 or exposure of glioma cells to exogenous Ang2 also caused an up-regulation of MMP-2 and MT1-MMP and acquisition of increased invasiveness in vitro. We have started to investigate the mechanisms by which Ang2 stimulates glioma invasion. We found that Ang2 stimulates the secretion of MMP-2 by interacting with beta1and (alphavbeta3 integrins leading to activation of the focal adhesion kinase (FAK)-mediated pathway. Ang2 also stimulates the expression of MT1-MMP by interacting with beta1 and alphav1beta3 leading to activation of the nuclear factor kappaB (NF-kappaB)-mediated pathway. In addition, transcriptional profiles of U87MG/Ang2 glioma cells analyzed by DNA arrays revealed that multiple sets of genes regulated by Ang2 are also involved in tumor invasion by various types of human cancers. The goal of this study is to further characterize Ang2-induced invasion, to determine the mechanisms of Ang2-induced invasiveness, and establish therapeutic approaches for inhibiting Ang2-induced glioma invasion. We have developed the following four aims: 1) Characterize Ang2-induced glioma invasion; 2) Determine the mechanisms by which Ang2 stimulates MMP-2 secretion and glioma cell invasion via the integrin/FAK mediated pathway; 3) Determine the mechanisms by which Ang2 stimulates MTI-MMP expression and glioma cell invasion via the integrin NF-KappaB-mediated pathway and 4) Explore therapeutic approaches for inhibiting Ang2-stimulated glioma invasion. The proposed studies will aid our understanding of the molecular mechanisms of glioma invasion. This application will enable us to decipher the multigenic programs activated in glioma invasion and significantly improve our current understanding of the mechanisms underlying the invasive phenotype of glioma cells. These studies could establish Ang2 and its effectors as potential therapeutic targets leading to the development of new anti-invasion strategies for glioma treatments.

Our overarching hypothesis is that a novel genome engineering system can be used to antagonize TGF-β1-mediated fibrosis and further improve the beneficial effects of MDSCs on muscle healing after injury.

This project investigated the effect of cell survival, proliferation, and differentiation on the regeneration capacity of various human MDSC populations implanted into the heart of mdx/SCID mice, and studied the role of angiogenesis in this process. No cost extension until 2015.