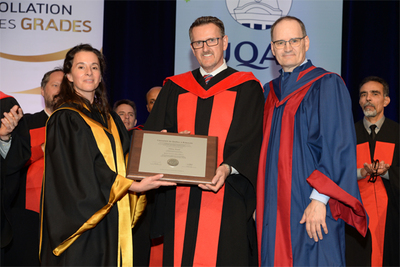 VAIL, Colo. – Steadman Philippon Research Institute (SPRI) Chief Scientific Officer Dr. Johnny Huard began his collegiate studies at the closest major university to his hometown of L’Anse-aux-Gascons, Québec, Canada back in the mid-1980s. This past weekend that school – University of Québec at Rimouski (UQAR) – awarded Huard an honorary doctorate degree.

A grateful and appreciative Huard took the occasion one step further. He announced plans to start an annual scholarship ($5,000-$10,000) for students from his hometown region, Gaspé Peninsula, in northeast Québec to attend UQAR.

“There are so many young people in my hometown area that don’t have the means to attend a university like UQAR and follow their dreams,” said Huard. “I want them to have the same opportunity that I had and pursue their studies in a field that they love.”

Huard was honored by the university during ceremonies—the school is celebrating its 50th anniversary this year—on Saturday, Oct. 26. The mid-sized university currently has an enrollment of 6,500 students, most of whom come from the northeastern part of Québec. It is the furthest north of any university in Québec and its programs include multidisciplinary research in marine science, regional development and nordicity.

It was the marine science and the proximity to his hometown that first brought Huard to Rimouski. Three summer months in a science lab guided the young student from Rimouski to his current post at one of North America’s most prestigious research institutes in Vail, Colo.

“I had a professor who offered a summer job in her lab during my undergraduate days at Rimouski,” recalled Huard. “She offered it to the student who had the top grade in her biology class that spring. Well, I got the job and those three months in Dr. Jocelyne Pellerin’s lab really shaped my career. I was just a kid studying marine biology. Before that summer in her lab I had no idea that I would fall in love with medicine and research. It was the spark that took me on the path I have taken in medicine and science.”

“I’m very touched to receive this honorary doctorate degree from UQAR,” said Huard. “The people that taught me at Rimouski and during my younger years had such a big impact on my career.

“I’ve been blessed to receive many wonderful awards in my 30 years of professional research in science,” continued Huard, “but in my heart, I know that this one is the best. It takes me back to where I first fell in love with scientific research and the desire to move medicine forward and help people live longer, better and healthier lives.”

The new scholarship is more than just a gift to his university but also represents a chance to give something back to his hometown and his roots.

“This is an opportunity for me to help the young people in northeast Québec enjoy some of the same opportunities that I did in my studies at Rimouski,” concluded Huard. “I want them to have the chance to spend a summer in a lab and maybe get the same spark that I had and begin their own journey into a meaningful career.”