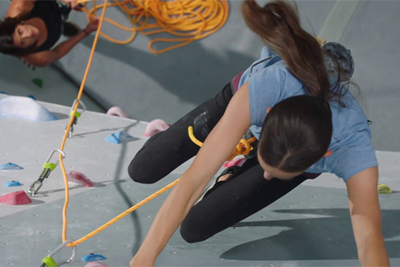 VAIL, Colo. – Today, what used to be called “rock climbing” is a modern sport that has advanced far beyond the recreational activity where you challenge your friends to see who can climb the highest at the local gym. Sport climbing has been a competitive sport for decades, governed by the International Federation of Sports Climbing (IFSC), that will debut as an Olympic sport at the Olympic Games Tokyo 2020.

Sport climbing’s rapid growth and worldwide exposure caught the eyes of the doctors, scientists and researchers at Steadman Philippon Research Institute (SPRI), who are proud to be the recipients of a grant from the International Olympic Committee (IOC) to study injuries suffered in the sport and explore new methods to prevent them from recurring. SPRI represents one-third of the United States Coalition for the Prevention of Illness and Injury in Sport, along with the University of Utah and United States Olympic and Paralympic Committee. The Coalition “exists to protect and preserve athlete health through innovative research and advancements in the field of sports medicine.” Supporting the health of sport climbers falls in line with the Coalition’s mission, along with helping athletes succeed on the world stage.

Lauren Pierpoint, Ph.D., is a sports injury epidemiologist and hip researcher at SPRI, and an avid fan of sport climbing and a long-time participant in the sport. Her interest in the sport has gone beyond participation to full-fledged research and study of the injuries most commonly suffered by sport climbers. Pierpoint is the principal investigator behind SPRI’s grant application and spearheaded the move to acquire the funds to begin a study she and her colleagues have aptly named “CRIMP.”

“Crimp is a type of sport-climbing move but, in our study, it stands for Climbing-Related Injury Monitoring and Prevention,” said Pierpoint. “It’s a surveillance system that we will develop and utilize as a tool for gathering data and information about the types of injuries climbers are suffering and how we might be able to prevent some of those injuries from happening in the future.”

The project’s initial focus is on preventing injuries to the thousands of young athletes that have spurred the growth of sport climbing. To that end, the research team will use proven research methods to devise and implement a nationwide injury surveillance system for more than 5,000 competitive youth climbers across the United States.

According to the SPRI grant application:
Modern climbing techniques require complex and strenuous movements, and high-volume training for young competitive athletes may increase injury risk in this vulnerable adolescent population. Skeletally immature climbers may face unique injuries, such as growth plate fractures of the bones in the fingers, due to repetitive loading of the upper body from a young age. To our knowledge, injuries among competitive youth climbers have not been systematically studied.

Pierpoint worked closely with Nico Brown, senior vice president at Vail Health and Howard Head Sports Medicine, on the formation of the grant application and credits a conversation between the two in Brown’s office for the creation of the CRIMP acronym.

“Once we got the name, we ran with it,” said Pierpoint. “And then we saw the application for this grant and followed through with the process. We knew that this would be a good fit for SPRI, and we were fortunate to get it approved.”

The process for this study had its roots in 2016 at one of SPRI’s annual meetings.

“Three years ago, I spoke at SPRI’s first annual Injury Prevention Symposium here in Vail,” said Pierpoint. “I presented on the epidemiology of sport-climbing injuries and it sparked a fair amount of discussion among some of the attendees. Climbing is becoming very popular and we are now seeing high levels of accessibility to the sport. There are over 500 sport climbing gyms in the United States alone.”

While the sport has been around for a long time, its emergence as a competitive and Olympic sport is relatively new. As Pierpoint indicates, there is much to be learned about its injuries and how they happen and recur. The competitive nature and diversification of the sport among men and women from all over the world is fueling its current growth.

“At the Injury Prevention Symposium, Nico was also presenting to the group on a return to sports protocol on shoulder injuries to sport climbers. We connected after the symposium was over and we both had similar ideas on wanting to study sport climbing injuries. There had not been a ton of research in sport climbing injuries and, like any other sport, what often appeared to be a normal finger or hand injury could eventually sideline an entire career in climbing.”

It wasn’t long before the collaboration between Pierpoint and Brown spawned the idea of the surveillance system and CRIMP was born.  They reached out to others in the medical field and were joined in the study by members of the University of Utah Orthopaedic Department, headed by Professor Stuart Willick, M.D.

“This project would not be moving forward without the tremendous support and research provided by Dr. Willick and the others on his staff at the University of Utah,” said Pierpoint. “The Utah staff has been actively instrumental in getting the CRIMP project off the ground.”

“We’ve had a longstanding partnership with the United States Olympic and Paralympic Committee,” said Grant Dornan, SPRI’s Director of the Center for Outcomes-Based Orthopaedic Research. “It is really nice to see this team’s initiative, innovation and hard work recognized and supported by the IOC.”

“This has been a few years in the making and is a keystone to hang our hats on, especially as SPRI partners with the University of Utah and the United States Olympic and Paralympic Committee,” continued Dornan. “It shows what the Coalition can do in the field of injury surveillance and prevention research. The IOC recognized that we have every opportunity for success and that the timing was perfect with the debut of the sport in the Olympic Games Tokyo 2020 next summer. It is our goal to document and quantify injuries in this sport and hope that the next generation of athletes, trainers and doctors can use the findings strengthen the sport and make it safer and even more enjoyable.”

The tie-in with SPRI and The Steadman Clinic is very easy to see. After all, the Steadman operations have been linked to the Olympic Games since founder Dr. J. Richard Steadman first served as the chief physician for the U.S. Olympic Ski team back in 1976.

“We have a group of surgeons at The Steadman Clinic that are excited about it,” continues Dornan. “Dr. Tom Hackett is really involved in the climbing
community and the CRIMP program complements other research being performed by Dr. Hackett and others at SPRI. We see it as a great fit here at SPRI and The Clinic and are anxious to dive into the research and see what we can learn from CRIMP.”